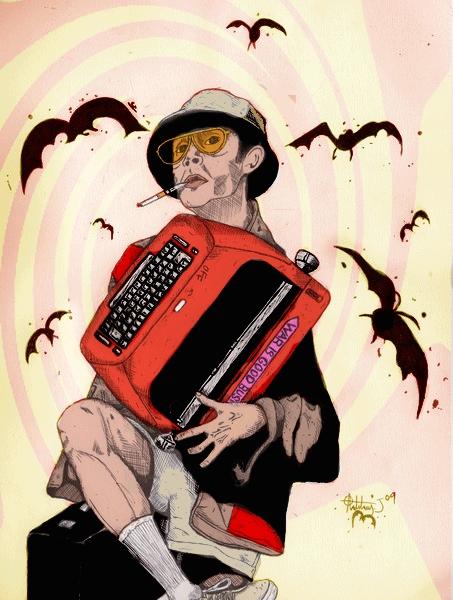 APD's Budget: What would you get rid of?

While Manley's gotta go...and the budget's gotta give...Cronk's job is teetering in the balance.

With some unanimously-passed and unprecedented Council resolutions as a guide, the City Council's first meeting of the Public Safety Committee * -- made up of the "Fab Four" members: Flannigan (chair); Harper-Madison; Casar & Garza -- took place a week ago Thursday to flesh out the groundwork in preparation of the city's budget season.  Normally, Council would be taking vacation now, showing back up in time to start worksessions and meetings the last week of July, but between COVID and all the big changes on the table, they are staying in to dig deep.
The first official councilmeeting for the budget is July 30th (with a hearing July 23rd & a worksession July 28th) and final passage of the budget comes down mid September.

That Thursday, they also broke into executive session to discuss Cronk's job--as it's near-time for his annual review.  Cronk comes to us from Minneapolis as an Asst. City Manager, but he didn't oversee police. He talked a good game, but we didn't know how he'd be when it came down to brass tacks or balls with the police union. Unfortunately, he's been as weak as any manger before him.  Cmbr. Alison Alter noted he's not taking initiative in reigning in APD...not doing or saying anything. "Your silence is deafening."
Then he broke his silence only to say he's keeping Manley. Whether this is to buy time because there really aren't any viable choices for a replacement out there right now (see "Police Chief Resignations..."), or a flat out slap in the face to Austin, will become more apparent by the draft budget he submits to Council in a few weeks. If it doesn't reflect the big changes needed...demanded by the community and council alike, then Cronk's presented his last budget.

A visionary city manager, one that Austin needs right now, wouldn't wait for the right chief or former chief to come along to get rid of Manley/install an interim. There are plenty of other options out there that aren't sworn officers in the upper echelons of management of an LEO (law enforcement organization). But that's another blog...
What Goes Up...Must Come - UP?
Grits explains the "catch-22" of police budgets: if crime goes up, we're told we have to increase budgets to combat it, if crime goes down - and it's down as far as it has been in 30 years - we have to increase budgets to not have crime go up. It's counter-intuitive, but then...cops. 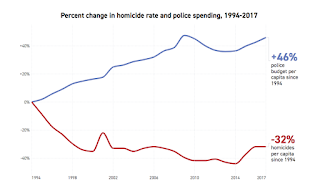 MEANWHILE...APD's budget. We need to get busy as a community and identify where we want to slash the proposed $100 million and what it should be diverted to...so we can share our suggestions with Council as they prepare their own proposals.
So here's the whole 2020 budget for APD - click on the arrows to dig deeper into each department/sector/category, etc.  (IM me on FB for the file-microsoft won't allow the embed) Go to p. 155 to look at the whole city budget for reference.
As a secondary source, here's an open source compilation someone did of many of APDs budget areas by category, spanning the past 12 years (which also captures things like $3000 for CheesyPoofs).
For those that don't want to take a couple of hours out of their day for this -- go HERE to manipulate the overall departmental budgets within the General Fund, and this community tool is explained further in the KXAN coverage of it.
Add your suggestions as to what should go away/and where it should go, in the comments.
Keep in mind that we have, by all accounts, one of the fattest police budgets, and the best paid officers, per capita. It's 10.5% of our city budget and just shy of 40% of our general fund. NYC's police budget is 8.5% of it's city budget; LAPD, 7%; and San Antonio, 5.5%.   From 2000 to Marc Ott's arrival in 2008, APD's budget increased 40%...under Ott (2008-2016), it went up $147 million - 60%...while our population growth was 19% (and we gained NO quantifiable accountability measures).
Under Manley, since 2017, it's increased another $50 million...and accountability seems to be sliding backwards.
Meanwhile, over the last 20+ years, Fire and EMS have barely kept up with population growth, if that.
Another measurement: the APD budget is $426 per resident. Houston and LA are $385 per resident...we certainly don't have MORE of a crime problem than those cities. $354 is the average across the US.
A major question, being posed in a series from the New York Times, is how much time/how many resources are dedicated to dealing with actual violent crime: 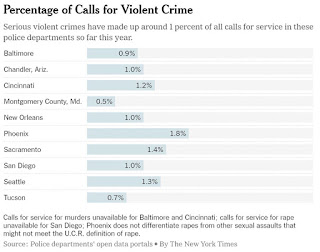 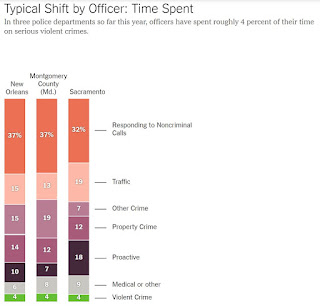 So hack away, Austinites...leave your ideas below.
* The committee was created through a council resolution to broaden the purview of an existing committee that oversaw municipal courts to also include policing issues.
Posted by Deb at 8:38 PM

Deb
Debbie Russell has engaged in many coalition-building efforts on a local and regional level with a broad range of communities and on a variety of issue fronts. She has worked on many candidate campaigns and issue ballot measures. Debbie served on the Del Valle ISD Board of Trustees (representing District 2) from 2011 - 2019 and volunteers on behalf of the ACLU-TX and Austin Lawyers Guild: focusing on police accountability and open government and was a member of the City of Austin's Public Safety Task Force. She was named Austin's "Most Active Activist" in the Austin Chronicle, Best of 2005; received the ACLU-TX "Outstanding Activist" award in 2009; and in 2010, she received a Volunteer of the Year award from Texans for Accountable Government, a "Si Se Puede" award from PODER: People in Defense of the Earth and Her Resources and a Spike Gillespie "Kick Ass Award."